A national service of remembrance in Glasgow has been cancelled due to the ongoing coronavirus restrictions. The dedication and wreath laying service at the Garden of Remembrance in George Square will instead be broadcast online for the first time. 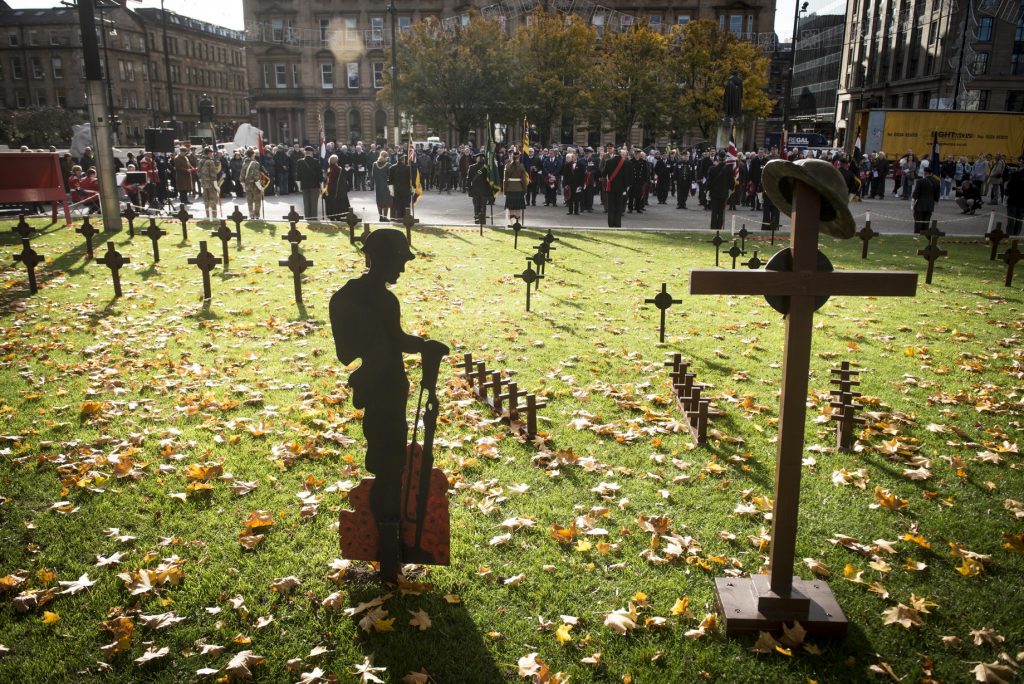 The annual service normally attracts hundreds of spectators who stand shoulder to shoulder in the shadows of the cenotaph to pay their respects to the fallen of the First and Second World Wars, and all conflicts since.  Due to the ban on outdoor events across central belt health board areas, and the risk it would pose to the public, Legion Scotland have been forced to adapt. The event was scheduled to take place in George Square tomorrow morning but instead Legion Scotland will broadcast a special service of remembrance live on their Facebook page from 1050, ensuring the public can still join together in paying their respects.

Dr Claire Armstrong, Chief Executive of Legion Scotland, said: “We are very disappointed that the opening of the Garden of Remembrance cannot proceed as planned, but we are determined to ensure that the public can still come together in remembrance of those who have made the ultimate sacrifice. Coronavirus must not be allowed to cancel remembrance, but public safety is paramount.

“Unfortunately, this is not the first time that we have had to adapt our plans this year. We undertook three major commemorations in the 75th anniversary of VE and VJ Days in May and August respectively, and the 80th anniversary of St Valery in June, with considerable success. The virtual programme of events reached millions and were arguably even more successful as a result of being taken online.

The service will be hosted by Legion Scotland National Padre Rev Dr Karen Campbell and will include a two minute silence at 1100.  The Lord Provost Philip Braat, in his capacity as Lord Lieutenant, was expected to lay a wreath on behalf of the City of Glasgow at the service. Instead, he will lay the wreath in private today.

The Lord Provost said: “Legion Scotland’s Garden of Remembrance ceremony is an important event in our calendar of Remembrance activities. This ceremony allows us all to reflect and demonstrate our gratitude for those who gave their lives in conflict to preserve our freedoms. I am always proud and privileged as Lord Lieutenant to have the opportunity to demonstrate the city’s support for our armed forces, past and present.

“Sadly, due to the changing situation of the pandemic and the national social distancing rules that have been introduced for health and safety reasons, it means that this event cannot go ahead as planned this year. I know how important these occasions are to our serving military personnel, our veterans and the citizens of Glasgow, and I understand that this will be disappointing, but it is also understandable. Although we cannot hold mass gatherings at present, I still intend to lay a wreath to mark the occasion on behalf of the city, because Glasgow owes its military and veterans a great debt.”

The current Scottish Government guidelines on outdoor last until 2nd November and further details on what will be permitted on Remembrance Sunday and Armistice Day are expected later this week.

Dr Armstrong continued: “While we await clarity on how new guidelines will impact on Remembrance Sunday and Armistice Day, it is safe to say that these events, both at a national and local level, cannot proceed as they normally would. We are therefore urging all Legion Scotland branches, and other organisations who have responsibility for remembrance events in their local area, to take note of the guidelines and only to stage events that are safe and fully compliant.”

She added: “It is important to note that the Glasgow Garden and Field of Remembrance is open to the public. While mass gatherings are not permitted, we would very much encourage the public to visit on an individual basis. I also urge everyone to support this year’s Scottish Poppy Appeal. Thousands of Poppyscotland volunteers and Legion Scotland members are unable to collect as they normally would. Nevertheless, our Armed Forces community rely on the vital, life-changing support provided by Poppyscotland and they can only continue to deliver that through the funds raised during the Poppy Appeal.”

The virtual service of remembrance can be viewed at any of the following links:

For more information on the 2020 Scottish Poppy Appeal visit www.poppyscotland.org.uk.