A competition launched by The Seafarers’ Charity to mark Maritime Safety Week (4-8 July), invited everyone who works at sea to practice and improve their crew muster safety drill. 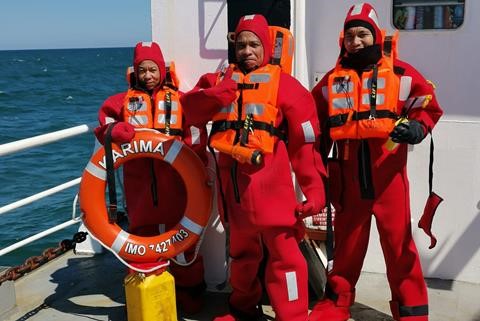 The competition saw crews from fishing vessels to chemical tankers, and even Border Force, submitting photographs and videos of their safety drills. Many of the crews found that through practice they were able to improve their drill time, which in a real emergency at sea, could help save lives.

The competition judges, Robert Greenwood, Director of The Safety Folder and Captain Jeff Parfitt, Head of Safety & Environment at The Nautical Institute, reviewed all entries submitted and were delighted to choose four winners based on speed, technique, and style of each crew.

The Karima is a 26-metre fishing trawler and they have won First Prize. The crew produced a brilliant video of their drill while out in the North Sea.

By taking part in the competition, the Karima crew halved their drill time to 2 minutes and 27 seconds after practising for 2 weeks, which is very impressive considering the amount of safety gear and survival equipment they donned including pyrotechnics and Search and Rescue Transponders (SARTs). The crew reported that practising this drill together was also very helpful for those crew members who had recently joined the vessel.

The Benaiah IV is a 20-metre fishing trawler also fishing in the North Sea.
By taking part in the competition, the Benaiah IV crew had significantly improved their drill times too and the judges were impressed with the additional survival equipment brought to the muster point as well. Their safety drill demonstrates that survival at sea in an emergency is all about working together as a team.

‘We wanted to highlight the best fishing vessel entry in the Safety Drill Time competition, but in the end, it was just too difficult to choose between the quality entries from Karima and the Benaiah IV and we decided they are both very worthy winners. Well done to both crews.’

The other two winners were both Ardmore Shipping tankers who demonstrated a great level of skill and teamwork.

The Ardmore Cherokee is a 159-metre tanker. The crew’s muster drill really impressed the judges, as they demonstrated their lifeboat launching drill as well.

Here are some top tips from the crew:

• ‘The “secret” is just the proper implementation of requirements and carrying out drills in a very realistic manner.
• Briefing and debriefing sessions are very important while looking to make the crew more responsible.
• Always look for inexperienced crew and help them to get better instead of keeping them away from the action.’

The Ardmore Encounter, a 183-metre tanker crew’s muster drill was also judged as very competent by the judges, and they produced a great video while improving their safety drill time.

Regular drills were carried out ahead of the competition and helped the crew improve its speed.

All four vessels won great quality gear from Guy Cotton Clothing and XtraTuf, as well as Safety Champion 2022 plaques for each vessel. Congratulations to all winners and a huge thank you to all participants for taking part.

The Seafarers’ Charity is planning to run the competition again in 2023 – so there is plenty of time to begin practising for next year!