The King’s Own Scottish Borderers Association will celebrate one of their most famous battle honours on the closest Saturday to the 1st August, with a parade, presentation of roses, march past and a social gathering at the Barracks Berwick upon Tweed. This instruction forms the basis of the day. For 2022 the parade will take place on

All Borderers are welcome to attend and must be members of the KOSB Association, comrades from other “Minden Regiments” are welcome by prior agreement from Association EXO.
All Borderers attending must assess their own health as to whether they can parade and march. For those with restricted mobility a parade area will be established in front of the clock where the Mayor will present roses to assembled Borderers. 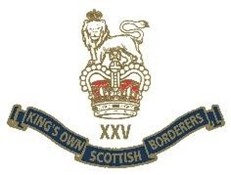 “MINDEN” was the second Battle Honour awarded to the 25th (EDINBURGH) Regiment as
The King’s Own Scottish Borderers were then called, and the battle is celebrated on 1st August every year

During the Seven Years War against the French, a force of six British Battalions, seven German Battalions and Allied Cavalry was operating in the valley of the River Weser near the town of Minden in Germany. The British Battalions were the 12th, 20th, 23rd, 25th, 37th and 51st Regiments of Foot.

The British Battalions were ordered to take a minor objective, but owing to a misunderstanding advanced on the main body of the French Army. Seeing this, Prince Ferdinand the German Commander of the allied forces ordered the German Battalions to support the left flank and the Cavalry to advance along the high ground on the right as protection to that flank. The Cavalry Commander Lord George Sackville, declined to accept orders from the Prince and the Cavalry remained spectators of the Infantry battle.

Seeing the advance of a small force the French sent their Cavalry some 10,000 strong into the charge. The six British Battalions halted and at close range with well-aimed and disciplined volleys broke the French attack. The French Cavalry reformed on six separate occasions and returned to the charge. On only one occasion did a Squadron succeed in penetrating the front rank and then they were almost annihilated by the second. Finally all seventy five Squadrons were sent flying in total disorder.

The British Infantry continued their advance and coming under the heavy crossfire of sixty cannons and musketry fire from the French Infantry suffered heavily. The French threw in two Brigades in an effort to stem the tide but they were quickly broken. Finally in desperation a large body of their Saxon allies were sent to counter attack but they fared no better than their French predecessors and the whole enemy line broke in panic. Had the British Cavalry then attacked the slaughter would have been immense as it was the French lost 7,000 men compared to British losses of 2,800 of which 1,500 were lost by the six British Infantry Battalions.

Visiting the scene of the battle afterwards Prince Ferdinand remarked “It was here that the British Infantry won immortal glory”.

In memory of our ancestors who earned this great Battle Honour and who plucked roses from the gardens of Minden as they went forward into battle, we of the MINDEN Regiments were roses in our hats on this proud day.