Forty years since the Falkland War began, pipers from across the world are being encouraged to come together to remember those who fell and were injured during the conflict. 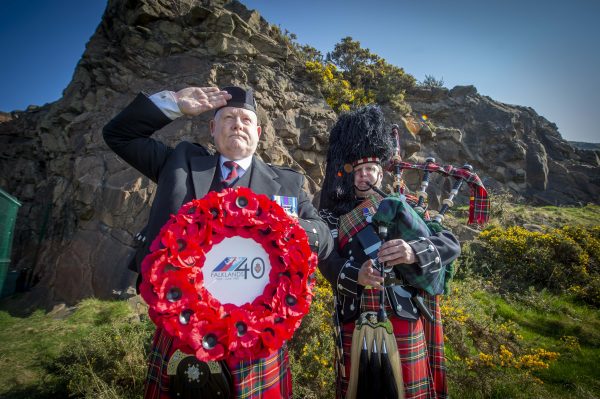 They are asking them to perform “The Crags of Mount Tumbledown” on their doorsteps, streets, or hillside at 11am on June 18th as part of a day of national commemorations. This iconic march was composed by a Scottish soldier while under intense Argentine fire on the remote Falklands hillside.

On April 2, 1982, Argentinian forces invaded the British territory, leading to the 10-week conflict. A parade and service of remembrance will take place in Edinburgh later on June 18th to mark the anniversary of the ceasefire, remembering tens of thousands who fought in the South Atlantic and the 255 British servicemen who lost their lives.

The Crags of Mount Tumbledown was famously composed on the back of a ration packet by Pipe Major James Riddell, of the 2nd Battalion Scots Guards, during the final battle of the conflict on June 13th, 1982.

After nine hours of fierce fighting and hand-to-hand combat, British forces captured the stronghold which guarded the approach to the Falklands capital, Stanley. This led to the Argentinian surrender but cost the lives of eight Scots Guardsmen and one Royal Engineer attached to the Battalion.

After the battle, Pipe Major Riddell, from Stonehaven, climbed to the top of the mountain and played the first rendition of his new composition in commemoration of the event. The following day, British forces retook Stanley and the Argentines surrendered.  Sadly, Pipe Major Riddell died from a brain tumour in 1997.

Graham Hopewell, from Ayrshire, was a 19-year-old drummer with the Scots Guards when he was sent to the Falklands, serving under Piper Major Riddell. He remembers fighting in bleak, freezing conditions, and losing close friends during the battles.

One memory he will never forget is coming under air attack in Bluff Cove on June 8th. Shortly after he landed, Argentinian air forces hit the British ships, Sir Galahad and Sir Tristram, resulting in the loss of more than 50 lives.

“We heard a massive explosion. When the planes came over the top, we just started shooting at them. There was no time to think about it and the adrenaline was just going.

“Later on, when we heard the ships had been hit, we realised it was real. I knew many of the Welsh Guards who were on the ships, and a close friend was killed in the attack. That was a huge shock, and it made us more determined to go on, so they hadn’t lost their lives for nothing.”

Mr Hopewell, 59, who now works as an undertaker, said:

“The Falklands has always stayed with me. I was one of the lucky ones, but I think everyone was affected by it in some way. When I came back, I had no one to talk to about it and I found it hard getting my head round it all.

“I feel honoured to play this year as part of the anniversary commemorations. It’s important that we remember all those who lost their lives.”

Lance Sergeant Macrae, from Sutherland, has served in Iraq and Afghanistan, as well as traveling the world with the Scots Guards Pipes and Drums.

“I’m very proud of what Graham and the others have done for us, and I’d encourage other pipers around the world to join us in paying tribute.”

“The Falklands conflict lasted just 74 days, but it had a profound impact on the lives of thousands of Scottish servicemen, women, and their families. Many paid the ultimate price and never returned home, while others have lived for decades with the physical and mental scars of the conflict.

“We hope that pipers in every part of Scotland, as well as the rest of the world, will join us in paying tribute to the sacrifices that they made. As we mark this anniversary, we’re pleased to be working with the Scottish Government and Armed Forces to hold national commemorations between now and June, and would encourage veterans, their families and the wider public to take part.”

“The extraordinary story of how Pipe Major James Riddell composed the Crags of Mount Tumbledown in the heat of the battle is symbolic of the courage and resilience of our Armed Forces. While this battle marked the end of the conflict, those who gave their lives must never be forgotten.

“Joining together in playing this tune will be a fitting tribute to everyone who played their part in the Falklands conflict, as well as the continued sacrifices that our servicemen and women make today. We hope it will encourage people to learn more about how these events have shaped our recent history, as well as highlighting the role of our Armed Forces community and the support that is available to them.”

For more information and to take part, visit poppyscotland.org.uk/Falklands40.