The nation paused at 11am on Sunday 8 November to observe the two-minute silence, marking a very different Remembrance Sunday from any that have gone before.  The coronavirus pandemic saw the cancellation of traditional remembrance events and parades across the country. 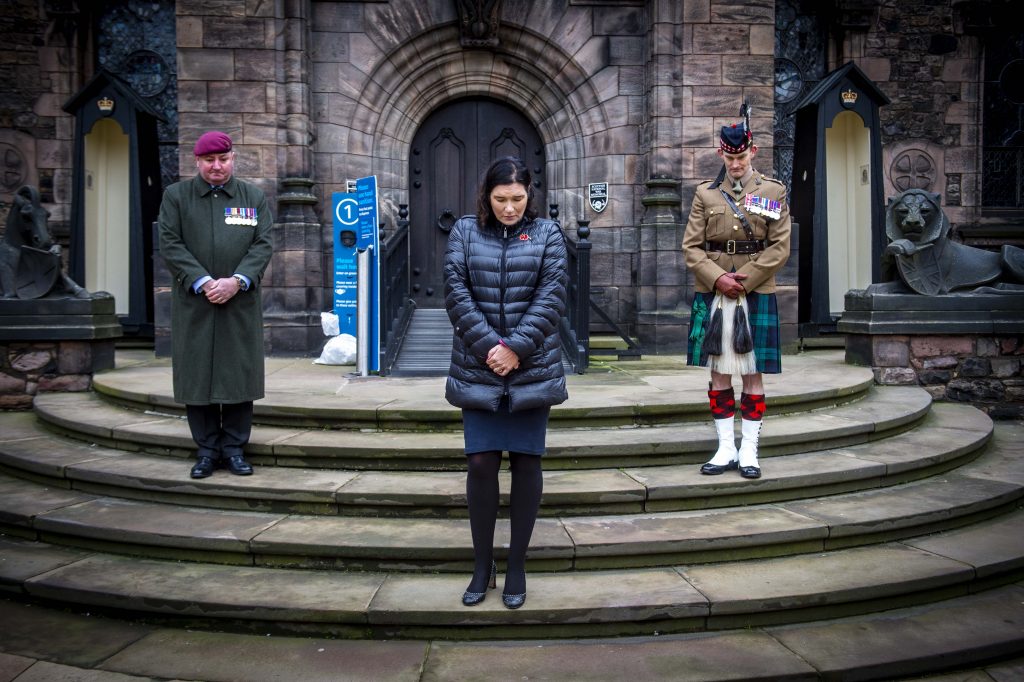 In Edinburgh, a closed national service of remembrance was held at the Scottish National War Memorial within Edinburgh Castle. Wreaths were laid on behalf of Her Majesty The Queen and the people of Scotland by the Lord Provost and Lord Lieutenant of the City of Edinburgh, Frank Ross, and the First Minister, Nicola Sturgeon, respectively.  Senior representatives of the Royal Navy, Army and Royal Air Force were also amongst the wreath laying party, which totalled only 22 people due to social distancing requirements and the numbers permitted within places of worship.

Around Scotland, thousands of veterans, serving military personnel and members of the public took to their doorsteps to observe the two-minute silence in a moving tribute to the fallen.

Speaking at the national service of remembrance, the First Minister said:

“Remembrance Sunday is an opportunity for all of us to take time to commemorate those who made the ultimate sacrifice for their country.

“It allows us a chance to honour the memory of those who gave their lives in the two World Wars and other conflicts, while also paying tribute to our veterans and those who continue to serve today.

“Commemorations this year have had to be marked differently because of the impact of the coronavirus pandemic and we understand it will be disappointing to many people that national services will not be open to the public. I am privileged to be able to lay a wreath today on behalf of the people of Scotland.”

“We have all been greatly affected by the cancellation of remembrance events around the country and this has been a great disappointment to so many because the act of remembrance is so very important.

“However, it has been heart-warming to see how we have all united in spirit, ensuring that remembrance is observed and that the memories of those who have made the ultimate sacrifice live on.”

2020 is a particularly poignant year as it marks the 75th anniversary of the end of the Second World War.  A moving dawn tribute took place on the ramparts of Edinburgh Castle, where the names of every military unit who suffered losses during the War were read out.

“Every single name of those who fell for Scotland in World War Two is listed in the books of the Scottish National War Memorial. We honour those who died in the darkest of times this morning at dawn on Remembrance Sunday as they gifted us light.”

Legion Scotland and Poppyscotland are calling on the public to take to their doorsteps once again on Wednesday 11 November at 11am to observe the two-minute silence for Armistice Day.  The charities will also stream a virtual service of remembrance online from 1045 on Wednesday. To view the broadcast visit: