A 101-year-old Scottish World War Two veteran has been awarded France’s highest military award –  more than 78 years after his part in the D-Day landings at Normandy. 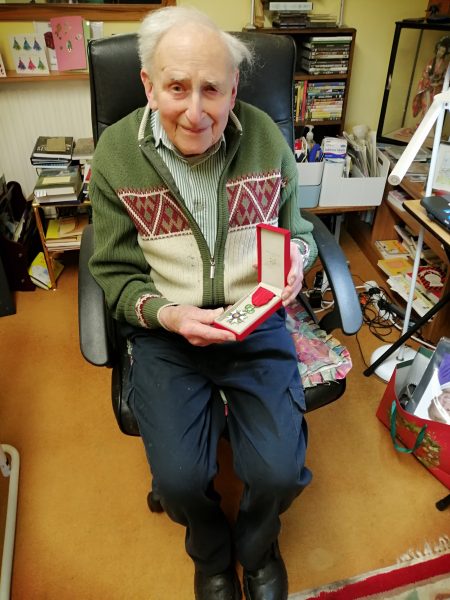 John McOwan, a retired jewellery shop owner from Peebles, was surprised and delighted to finally receive his Legion D’Honneur medal, describing it as “the best Christmas present ever”.

The former “Desert Rat” only realised he was entitled to the medal after joining other veterans, former Prime Minister Theresa May, and the then Prince of Wales in Normandy to mark the 75th anniversary in 2019.

But due to delays with the application process, he had almost given up hope of receiving his medal. He had been unable to attend a first ceremony at the French Embassy, before the pandemic, because of ill health.

Finally, with assistance from Sight Scotland and Legion Scotland, and representations from Edinburgh’s Lord Provost, the Scottish Government and Baroness Goldie, the medal was awarded.

“When it came in the post it was a complete surprise. I’d been waiting for this for years. It was the best Christmas gift ever.

“I hope that this might encourage other veterans to come forward and apply if they have missed out. My family are all very proud, and my great-grandchildren were very interested and wanted to know more about my story.”

Mr McOwan had planned to train as an optometrist after leaving school. But he joined the Royal Artillery aged 18 in 1939 shortly before the outbreak of war.

After serving on the artillery batteries defending the Forth Rail Bridge, he was then transferred to Egypt in 1940. He used his engineering skills to work on tanks, trucks and other equipment with the 7th Armoured Division.

Known as the “Desert Rats”, they served for several years in North Africa, going on to take part in the Allied landings in the south of Italy.

He was then involved in the Normandy landings, when tens of thousands of Allied troops landed on five beaches on 6 June 1944. The largest seaborne invasion in history, it marked the beginning of the liberation of France.

Mr McOwan and his division continued on to victory in Berlin, and he finally left the Army in 1946 as a Sergeant.

He returned to Peebles and took over the family jewellery business with his brother, retiring in 1990. He and late wife Betty had one daughter, three grandchildren, and four great-grandchildren.

Mr McOwan has already written a memoir with the help of Blind Veterans UK, which he published last year.

“The trip back to the Normandy beaches was a catalyst for me. I kept thinking back to my service days and wartime experience. Then during lockdown, I started writing to pass the time.

“I was really proud of my service, and I wanted to dedicate the book to my great-grandchildren. You often hear from people who knew nothing about their father’s or grandfather’s experience, and wishing that they had asked them more about it.”

“We are delighted to hear Mr McOwan has recently received the Legion D’Honneur, which is France’s highest distinction and awarded in recognition of both military and civilian merit.  It is very well deserved and everyone at Legion Scotland congratulates him and sends their best regards.”