Carnoustie War Memorial has been crowned the best in Scotland at a prestigious event in Edinburgh.  The annual competition, organised by the Royal British Legion Scotland (Legion Scotland), returned for a 39th year in 2021 having been paused last year due to the Covid-19 pandemic. 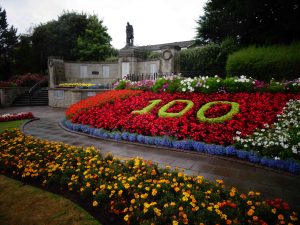 Memorials large and small were recognised at a ceremony held in Edinburgh City Chambers and hosted by Lord Provost of the City of Edinburgh, Rt Hon Frank Ross, on Friday 10th September. The Carnoustie memorial was chosen as the Champion of Champions, with other category winners including the War Memorials in Greystone Carmyllie (Angus) and Kirriemuir.

Legion Scotland’s Best Kept War Memorial competition was established in 1982 thanks to the vision of Bill Tait, a horticulturalist who was working with Edinburgh’s Botanic Gardens at the time. Observing that many local War Memorials were in a poor state, Bill initiated the competition to improve their condition and appearance. Many memorials that were in the poorest condition at the start of the competition are now regular winners, a testament to the persistence, hard work and passion of the Legion Scotland members and other local volunteers involved.

Bill Tait said: “Our warmest congratulations go to all of this year’s winners. War memorials are such an important part of the fabric of communities across Scotland. Nearly every city, town and village has a memorial and it remains a vital and highly visible means of remembering the sacrifices made by so many in defence of our country, from the First World War to more recent conflicts. Recognising the huge efforts to maintain these sacred sites through the Legion Scotland Best Kept War Memorial competition is so important and it is a great honour to be Chair of the judging panel.”

He continued: “The judges are looking for War Memorials to be in prime condition; clean, the masonry must be well maintained, lettering to be clear and legible and any metalwork to be well preserved. Access paths and seating are also important factors. On the horticultural side, the flora displays are scrutinised for their condition and should be weed free. Lawns and hedges should also be in pristine condition. Use of the Legion’s colours of blue and gold gain extra points.”

Speaking at Friday’s award ceremony, Lord Provost Frank Ross said: “War memorials provide an important place for reflection and the continued interest in Legion Scotland’s Best Kept War Memorial competition underlines the importance of remembering our fellow citizens, alongside those from elsewhere, who made the ultimate sacrifice in serving our country.

“As the Capital’s Veteran Champion and on behalf of the citizens of Edinburgh I would like to thank everyone who took the time to enter during these difficult times and to those who have organised the competition. It is truly impressive to hear that the competition this year was as fierce as always and the high standards attained. My sincere congratulations to the winners and thank you for your hard work and dedication.”