Council Tax, utility bills, groceries and rent; these are just some of the financial commitments that many Veterans face for the first time when they leave the Services.  Because bills have previously been deducted from pay at source, it can be a challenge to budget for them, yet failing to do so can bring long-lasting negative consequences.

In this section we provide direction to credit unions, which can offer a wide range of affordable financial services, and to debt advice and support organisations that can give advice to avoid and, if necessary, recover from debt.

Some useful websites include:

The law about debt is different depending on whether you live in England and Wales or Scotland. If you live in Scotland, make sure you are in our Scottish site so you get the right advice.

Welcome to Scotland’s Financial Health Service website (SFHS). This Scottish Government website is the place to come if you have financial concerns or are just seeking useful, free and impartial advice which you can trust.

Government Guide to Benefits, Tax Credits and Other Support

A number of veterans are unaware of the various benefits and other support that they may be eligible for and as such the link below will offer advice and guidance.

You may be missing out on financial help that you are entitled to through welfare benefits. The entitled to calculator can help you check what you might be able to claim.

To refine your searches by local authorities choose from the form below and click search.

We want to work in partnership with our stakeholders. This is where you can find resources for you to help us promote the benefits we deliver. If you would like to request any hard copies of our resources please complete the Marketing Materials request form below.

Education and training funding for veterans

You can get help paying for qualifications whether you:

Trustees of the Veterans Foundation allocate grants every three or four months.  They welcome applications from Armed Forces charities and other organisations carrying out charitable work for serving or veteran members of the Armed Forces, qualifying merchant seamen, and their dependants, who are in need. Deadlines for applications are the end of December, March, May and September each year. Further details can be found on the website www.veteransfoundation.org.uk/grant-application/ .

Find funding for your charity, community group or social enterprise using online websites. From small grants to funding for big capital projects, using these tools you can track down various sources of funding you need to make a difference in your community.  We have listed several of these organisation that you may wish to engage with regarding future funding of your projects.

Join over 3,000 subscribers to the best-selling funding websites for charities, containing more sources, commentary and funding analysis than anywhere else.

The Veterans Welfare Service (VWS) is committed to enhancing the quality of life for Veterans and beneficiaries of pensions (War and Service) and compensation schemes, and all their dependants. It also focuses upon providing support that will enable the seamless transition from Service to Civilian life, assist bereaved families or respond to key life events that present welfare needs.

It gives support and advice in the areas of:

It achieves this by adopting a single central coordinating role that facilitates access to all appropriate services. The VWS provides a caseworker approach that offers professional help and guidance through either telephone contact or a dedicated visiting service. Under the Veterans UK the VWS works in collaborative partnership with the tri-Service, ex-Service charities, statutory and non-statutory bodies, local community service providers and Veterans Advisory and Pensions Committee’s to deliver a quality welfare service that promotes independence, maintains dignity and provides continuous support through life.

We advise veterans and their families on their needs, issues and concerns.

We are independent statutory bodies established by government. Formerly known as the War Pensions Committees, we advise and liaise with veterans, their families and relevant organisations on their needs, issues and concerns. We assist, raise awareness, act as advocates and provide governance to the veterans’ community, and champion the rights of veterans and their families where there is injustice, inequality or a lack of fairness.

There are 13 VAPCs across the UK. You can contact us using the links below.

If you are unsure which region you belong to and would like to be put in touch with your local VAPC, you can contact the Veterans UK Team.

Veterans Scotland’s aim is to establish cooperation and coordination between Veterans Organisations in Scotland, to act as a focal point for all matters concerning the ex-Service community within Scotland and to represent these matters to Government at all levels.

Trustees of the Veterans Foundation allocate grants every three or four months.  They welcome applications from Armed Forces charities and other organisations carrying out charitable work for serving or veteran members of the Armed Forces, qualifying merchant seamen, and their dependants, who are in need. Deadlines for applications are the end of December, March, May and September each year. Further details can be found on the website www.veteransfoundation.org.uk/grant-application/ .

Bereaved children’s military charity, Scotty’s Little Solders, has been awarded two grants from the Veterans’ Foundation, totalling £35,766, to help provide support to children and young people who have experienced the death a parent who served in the British Armed Forces. 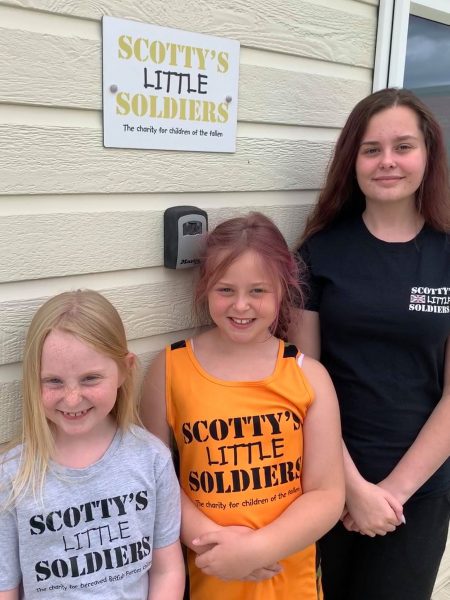 The Veterans’ Foundation was set up to help fund charities and other charitable organisations that are helping serving and former members of the Armed Forces, and their dependants, who are in need. The Veterans’ Foundation raises its money through the Veterans’ Lottery and donations, and has shown continued support for Scotty’s Little Soldiers, having awarded the charity with a number of grants dating back to 2017, and every year since.

Scotty’s Little Soldiers was founded in 2010 by war widow Nikki Scott, a year after her husband, Corporal Lee Scott, was killed in action in Afghanistan. Nikki saw the devastating impact on their two young children and set up the charity to help others in the same situation.

The Veterans’ Foundation has provided Scotty’s with a £15,766 grant which will be used to fund Scotty’s ‘Smiles’ programme. This will go towards gifts for Scotty members at difficult times of year such as birthdays, Christmas and the anniversary of their parent’s death, as well as events and activities that help remind the children and young people they aren’t alone.

Additionally, a second grant of £20,000 will be used to fund the salary of Scotty’s Strides and Springboard Programme Co-ordinator, to provide career and development opportunities to young people who have experienced the death of a parent who served. This will be delivered through workshops, training days and mentoring, as well as personal grants to broaden the individual’s skillset.